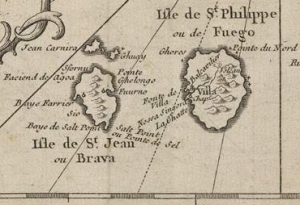 On August 4, 1578, while in a battle in Morocco, King Sebastian dies in battle without an heir. His death and lack of an heir will lead to a crisis for the Portuguese monarchy, the late king’s elderly granduncle Cardinal Henry is crowned King of Portugal.

On January 31, 1580 the elder King Henry I [Cardinal Henry] also die. At this time Portugal becomes worried about be able to maintain their independence and they begin a search for a king. In the end there would be two competitors for the throne of Portugal. One was Philip II of Spain, who on his mother’s side was the grandson of King Manuel I [King of Portugal from 1495 to 1521] and on that basis claims the Portuguese crown. The other was António, Prior of Crato, the illegitimate son of one of the younger sons of Manuel I.

But what does this have to do with Cape Verde one might ask. The answer is an interesting one, in 1581 began a short-lived revolt against Spanish rule of Portugal on the Island of Fogo. The residents of Fogo refused to accept Philip’s authority.

During Fogo’s rebellion against King Philip II of Spain as a Portuguese king in 1580s, one of the ringleaders was Garcia Alvares Baraça. Another leading rebel in 1582 was Baraça brother, Alvaro Gonçalves. Two of the five ringleaders were positively identified as New Christians [Cristãos Novos or Jews forced to convert to Christianity], and therefore the rebellion led by this group may have been related to Philip II/I’s known patronage of the Inquisition.

In 1654, the Island of Fogo receives its reward for being loyal to the Portuguese monarchy. After Portugal regained its throne from Spain in 1640, the village of São Filipe was given the administrative status of city and would be known as Cidade de São Filipe [City of São Filipe].