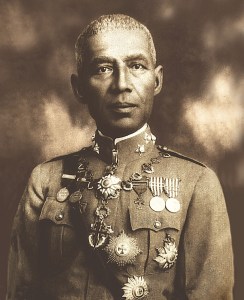 When we think of Cabo Verdean military leaders or commanders we seem to not get passed Amilcar Cabral, Pedro Pires, Aristides Perreira and some of the other leaders of the Independence movement. But there were a handful of pre-indepence era military men and one of them was General Viriato Gomes da Fonseca.

General Viriato Gomes da Fonseca was born on December 13, 1863, a native of Curral do Coculi in the Parish of Santo Crucifixo, on the Island of Santo Antão to Manoel Gomes da Fonseca and Julia Juanna Fortes. At the age of seven Viriato Gomes da Fonseca move from Santo Antão to the capital of the Portuguese Empire.  In 1897, After completing his studies at the War College the young lieutenant Viriato returns to Cape Verde with the fixed aim to help in the development of the islands. Viriato was blessed with extraordinary speaking skills and communication skills, he was also very charismatic.

In 1907, he was appointed commander of a battery in an expeditionary mission to Guinea. he fought, at the time, in what was called  the ‘pacification wars’ against the indigenous peoples in the struggle against the Portuguese presence in that territory.

After returning to Lisbon, Viriato was promoted to Major. Back in Cape Verde, Major Viriato Gomes da Fonseca was given the position  of Director of Public Works and Head of Surveying.

Connecting the water supply to the village of Ponta do Sol, the study of the Levadas [an irrigation channel or aqueduct]  and  a topographical survey of the Concelho do Paul, are the most essential works completed by Viriato Gomes da Fonseca on the island of Santo Antão. He also surveyed Montado Real on the Island of Fogo and also had plans for the port on the island of Brava.

Viriato Gomes da Fonseca was also Military Commander of São Vicente, Director of the Municipality of the island of Santo Antão, December 1910 to November 1912 and during the same period, he served also as President of the Municipal Commission of that island.

By 1919, the people of the islands recognized his expertise in the works carried out by Viriato Gomes da Fonseca and they were aware of his great patriotism and love for the homeland, the people entrusted him with the task of representing the Province of Cabo Verde in Parliament. this is how he entered politics and became what today we would call a congressman for the Partido Republicano Português (PRP), from 1919 to 1922 and for the Partido Republicano Constituinte, from  1922 to 1925.

At 63, he was promoted to general and provided services at the Institute Geagráfico and Cadastral, with several studies of his own on the registration of land ownership published by the institute and the Military Magazine. General Viriato Gomes da Fonseca was the only black man who attained the Portuguese army rank of general and probably of any other European army.

General Viriato Gomes da Fonseca  died on February 26, 1942, at his residence,  at the Villa Cesaria in Paco de Arcos, Portugal.

Some awards and commendations won by General Viriato Gomes da Fonseca are: