Today’s post is dedicated to every Cape Verdean Women that has lived or that will ever live. During a time when being a woman meant that you had to rights and everything you owed would belong to your husband [once you married], in Cape Verde we had some women breaking ground hundreds of years before the feminist movement.

The second donatary*** of Ribeira Grande [Southern Santiago], which today is called Cidade Velha, was BRANCA de AGUIAR the daughter of the founder of Ribeira Grande Antonio de Noli. Branca de Aguiar inherited everything that belonged to her father including his titles; she was in charge from 8 Apr 1497 – 27 Oct 1526. She was married to Jorge Correia a Portuguese nobleman, who became co-ruler.

***A Donatário, a Portuguese word roughly meaning endowed or donated, sometimes anglicized as Donatary, was a private person (often a nobleman) who the Crown bestowed a considerable piece of land (called a donataria) to administer.

Normally, the donatário was the recipient of a Captaincy, a territorial division and land grant, within Portuguese colonies.

The donatário was obligated to govern their territories under specific terms: in exchange for the grant, the donatário received tax immunities, but was also responsible for promoting and settling new residents to his territory, establishing churches (following the Catholic faith), protect them from frequent pirate attacks and promoting agriculture and commerce. 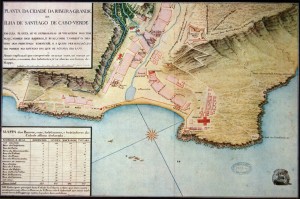